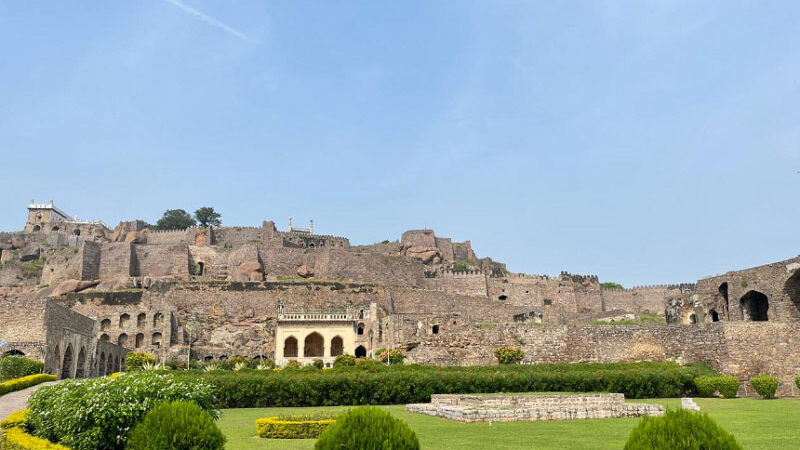 Golconda Fort, also known as Golkonda, Gol konda (“Round shaped hill”), or Golla Konda, is a citadel and fort in Southern India and was the capital of the medieval sultanate of the Qutb Shahi dynasty (c.1518–1687), is situated 11 kilometers (6.8 mi) west of Hyderabad.

It is also a tehsil of Hyderabad district, Telangana, India. The region is known for the mines that have produced some of the world’s most famous gems, including the Koh-i-Noor, the Hope Diamond, and the Nassak Diamond.

Golkonda was originally known as Mankal. Golconda Fort was first built by the Kakatiya dynasty as part of their western defenses along the lines of the Kondapalli Fort.

The city and the fortress were built on a granite hill that is 120 meters (480 ft) high, surrounded by massive battlements.

Sultan Quli formally became independent in 1538, establishing the Qutb Shahi dynasty based in Golkonda. Over a period of 62 years, the mud fort was expanded by the first three Qutb Shahi sultans into the present structure, a massive fortification of granite extending around 5 km in circumference.

It remained the capital of the Qutb Shahi dynasty until 1590 when the capital was shifted to Hyderabad. The Qutb Shahis expanded the fort, whose 7 kilometers (4.3 mi) outer wall enclosed the city.

The Golkonda Fort used to have a vault where once the famous Koh-i-Noor and Hope diamonds were stored along with other diamonds.
Many famed diamonds are believed to have been excavated from the mines of Golkonda, such as:

The whole of the Golconda Fort complex and its surroundings spreads across 11 km of total area,
Bala Hissar Gate is the main entrance to the fort located on the eastern side.

It is believed that there is a secret underground tunnel that leads from the “Durbar Hall” and ends in one of the palaces at the foot of the hill.

It is also believed that there was a secret tunnel to Charminar.

The “Kala Mandir” is also located in the fort. It can be seen from the king’s durbar (king’s court) which was on top of the Golkonda Fort. The other buildings found inside the fort are :

The Huge gates of the fort are decorated with large pointed iron spikes. These spikes prevented Elephants from damaging the fort. The fort of Golkonda is encircled by an 11-km-long outer wall. This was built in order to fortify the fort.

Naya Qila is an extension of Golkonda Fort. The ramparts of the new fort start after the residential area with many towers and the Hatiyan ka Jhad “Elephant-sized tree” – an ancient baobab tree with an enormous girth. It also includes a war mosque. The local government plans to convert the area into a golf club.

The tombs of the Qutub Shahi sultans lie about one kilometer north of Golkonda’s outer wall. These structures are made of beautifully carved stonework and surrounded by landscaped gardens. They are open to the public and receive many visitors. 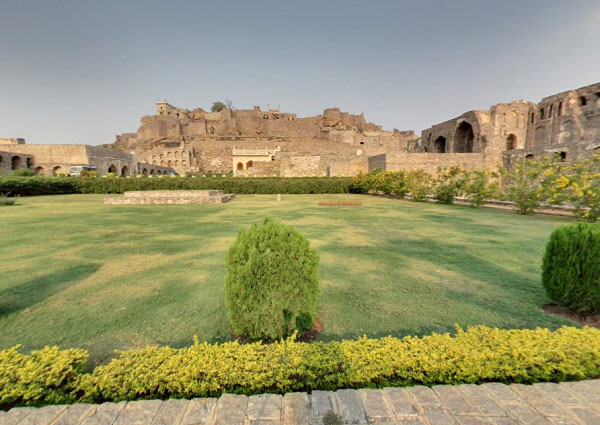 It is believed that there is a secret underground tunnel that begins at one of the durbar halls and leads to one of the palaces at the bottom of the hill. The route was originally meant as an escape route for the royals but has never been found since.

2. It has inspired 3 places with a similar name

One in the USA, One in Arizona, one in Illinois, and the other in Nevada
The mining town of Golconda, in Arizona and now a ghost town, was named after Golconda Fort since it had mines like the ones found near the Golconda Fort in Hyderabad.

The town was named Sarahsville in Illinois was renamed Golconda on January 24, 1817, after the ancient city of Golkonda

There’s another Golconda in Nevada which too is now a ghost town.

Darya-e Nur, Nur-Ul-Ain Diamond, Kohinoor, Hope Diamond, and Regent Diamond have been owned by the sultans of Golconda before they moved out of India.

4. Ancient madman who saved the city.

Legend has it that a person called Majzoob who was considered to be a mad man stayed beside the Fateh Darwaza and secured it. At the point when Aurangazab was prepared to overcome the Fort, the presence of this person never permitted them to invade the passage.

Only when another officer in the Mughal armed force made him move from that point, was Aurangazed able to attack the fort.

A clap at a fixed place at the entrance can be heard clearly at the ‘Bala Hissar’ pavilion, the highest point almost a kilometer away. This served two purposes – if an intruder got in, it served as a warning. Secondly, it also served as a way for the royals to know they had guests.

The Golconda Fort is full of such architectural and acoustic marvels. Even whispers at some corners of the halls can be heard distinctly in the other corner.

6. The fort has Mahankali Temple on the top.

The Sri Jagadamba Maha temple atop Golconda is as famous as the fort itself. The king – Ibrahim Quli Qutub Shah was so popular among his subjects that he was called Malkabhiram by Hindus.

7. It has inspired movies like Sri Ramadasu, among others.

The story has it that Rama Das, a revenue official jailed by Abul Hasan Tanah Shah, for misusing state funds to construct Badrachalam Sri Rama Temple, carved images of Rama, Lakshman, and Hanuman on a rock surface in the cell.

Legend has that Lord Rama came in the dreams of Tanah Shah and paid back the debt to release Rama dasu.

An African Baobab tree, known to local residents as Haiyan ka Jhad, located in the Naya Qila premises is more than 400 years old. It is said that Arabian traders gifted this to Sultan Muhammad Quli Qutb Shah.

This tree has a girth of 27.40 meters (89 feet) and a cave forms in between the branches of this tree.

9. The amazing sound and light show

Visitors are treated to an amazing sound and light show, consisting of a story full of kings, murders, love, and the history behind this amazing structure. A must-watch!

10. It was originally a mud fort, which expanded later on

Golconda, or “Golla Konda”, literally meaning Shepherd’s hill, was originally built in the thirteenth century by the then Kakatiya rulers.

A Shephard boy originally came across an idol on the hill, which led to the then rulers constructing a mud fort. The fort had expanded around the mud fort. 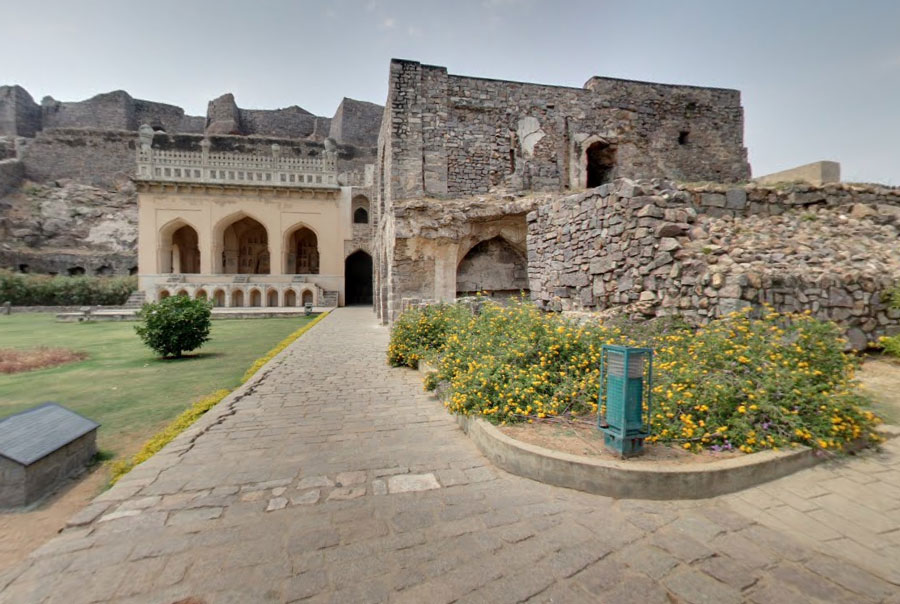 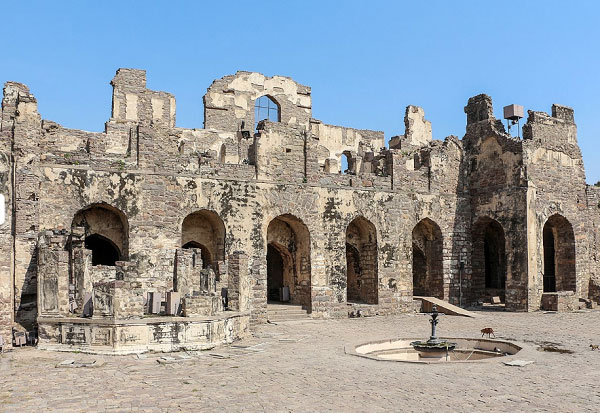